And from that day, o'er hill and glade,
through those old woods a path was made.

Here are the most recent news and ideas from Calf Trail. For the most convenient access, subscribe to our feed in your favorite newsreader!

What do iPhoto star ratings mean?

One thing I enjoy most about Photon Star's workflow (besides rating pictures with a remote!) is that it lets me focus on one rating level at a time. I've found it helpful to keep in mind a potential "use" for photos of a given star rating, along with some rough guidelines to work through each rating stage. The logic I follow goes something like this:

I really only use these personal guidelines as a fallback when I have trouble making a spontaneous decision. If my criteria dictate 2 stars for a photo but I'd rather not be so harsh, it gets 3 stars. I rate for my own enjoyment and benefit, and individual ratings are easy to adjust if I feel differently later. It's more helpful to rate all my photos approximately, than to fret about one photo being a star off.

My own rating guidelines in practice

Here's a one-star picture from a recent trip to Portland: 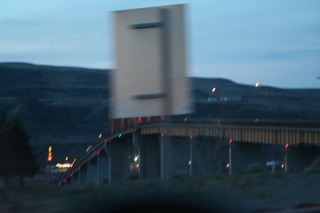 Even if the road sign hadn't zipped between my lens and the Biggs bridge, the exposure caught significant camera shake and I had a bit of the car's dashboard in the foreground. Yuck.

I gave this photo two stars: 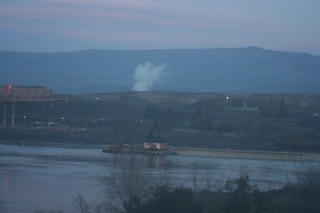 It's still not a great photo by any means, but...I dunno...there's a cool barge with a crane on the river? (I did have iPhoto include the places assigned by Geotagalog when I exported the examples from this trip, if you're curious where they were taken!) 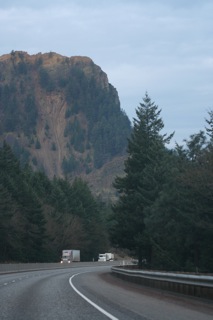 There's a lot I like about this photo, so I'm not sure why I initially gave it three stars instead of four. I do end up with pictures like this every trip through the mountains, so maybe I was just bored with it when I got home. I think I'll bump it up to four stars (it's easy as pressing Cmd-4 in iPhoto) now that the scene feels adventuresome again.

Why does this next one get four stars? 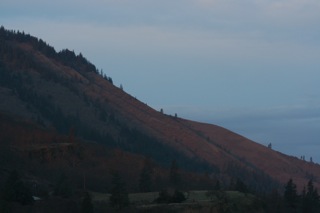 It was tough getting good photos on a grey morning through the fogged up windows of the back seat of the car, but I think the muted colors and unbalanced composition do quietly capture something that might be worth sharing.

When I get to the beginning Photon Star's last stage, I just exit rating and leave them all at 4 stars. 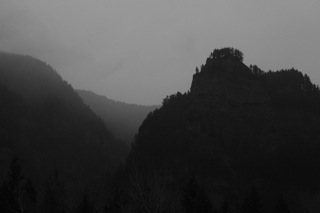 I'm glad I switched to black and white for this one to work with the cloudy day, and there are some intriguing shapes and textures that could potentially merit this one five stars.

Forming your own rating criteria

Realize that iPhoto was built to ask "How good is this photo?" and make you choose one of its five answers. (Six, if you're still trying to make "no stars" mean both "reject" and "not rated"!) iPhoto could have left it at thumbs up or down, or it could have split lighting/exposure/subject/effort/pizzazz apsects into a scoring rubric, or it could have made you color a diagram of your feelings towards each photo, or...— a scale from 1 to 5 stars is the reasonable design compromise we have when rating for iPhoto!

In my head, I rate my photos more like this: (These don't have any direct correspondence to iPhoto's star ratings, so I use the other chart instead.)

You don't have to work this all out before you can start organizing your iPhoto library by ratings. In fact, the best way to create your own rating chart is by using Photon Star to rate a few different sets of photos. Use iPhoto's smart albums or search field options to enjoy your work. Note any "mistakes" you see later after a fresh look. Watch how you end up sharing and what you tend to do with photos from each rating level. Then the next time you use Photon Star to catch up on rating, pay attention to what meanings the stars have for you.

I'd love to hear what terms you use when you think about your photos' quality. Is the way you match with iPhoto's star ratings similar to mine?

I'd like to get Geotagalog 2.0 out as soon as possible.

First: there's a confession I have to make. This major upgrade is the first version of Geotagalog I've actually used.

Of course I had "used" Geotagalog 1.x quite a bit, to make sure every feature worked as intended. But those versions didn't really fit my own personal workflow. I'd much rather tag photos after they're in iPhoto. I'm guessing I'm not alone.

I've been using an early alpha of Geotagalog 2.0 for a few months now, but that version hadn't worked well for others. There were some complicated, frustrating issues that needed to be solved before it would be ready to release. I took a much-needed break to get a clearer perspective (and to finish the first versions of Photon Star and Sesamouse). Then ten days ago, Geotagalog went back onto the workbench for another major overhaul.

Geotagalog is meant to be an incredibly easy way to geotag photos. Version 1.x let you essentially GPS-enable any supported camera, without any undue fuss. Geotagalog 2.0 extends this powerful simplicity to situations where it's not ideal to import directly from the camera. I spent the last week redoing all the new workflow options I'd been using so that they can work better for everyone. The improvements are exciting, and I'm much happier with the new features now.

I'd like to get a little feedback on how the latest version is working. There are some notes and a download of the current build on a private page — please email if you're willing to test some brand new code.

One consequence of the new workflow code is that Geotagalog 2.0 will require Snow Leopard (10.6). From our update statistics, it looks like this won't be much of a problem. Converting the rest of the code to take advantage of Snow Leopard will help future 2.x releases become even more betterfied.

This was the other complicated issue with the 2.0 release. Ever since we pioneered the "drag-to-track" geotagging method in Mercatalog, I've wanted to provide customers with a detailed enough map to take full advantage of visual geotagging. I have reached the unfortunate conclusion, however, that there are no good map options for a shareware app like Geotagalog.

The problem isn't a technical one: I've already written code to show detailed map tiles from any source. (In fact, the main reason I wrote Sesamouse was so I could test pinch zooming in this new map framework.) Geotagalog can't have a detailed map because for a small company like Calf Trail, there are no suitable sources that we're allowed to use. Big companies can afford the hefty commerical access fees, and individuals can make free map mashups. We're stuck somewhere in between.

So Geotagalog 2.0 will not have a detailed map. That's the short term plan. The long term plan is to change the global mapping industry. The medium term plan is to attempt one or more incremental workarounds — stay tuned to see what happens!

Now that Photon Star is out of beta, let's talk about the big picture.

(Here is a little picture.)

Digital cameras make it very easy to collect everyday images. Some people might say, too easy. We wouldn't say that, but as the hikes and vacations and get-togethers blur together through many years, it becomes harder and harder to find the right photo among thousands and thousands of snapshots.

That's where Photon Star's efficient rating workflow, and Geotagalog's straightforward geotagging come in. They take the drudge work out of two very important aspects of organizing photos. When an evening's outing can add hundreds of photos to your library, curation becomes a necessary chore. What we want is for that task to happen as efficiently as possible, so you have more time to spend just enjoying your photos (or out finding even better ones)!

Certainly Calf Trail is just one of many software designers working on photo-related software. Our goal is to keep writing focused applications that help you catch up and keep up with your photos. If there's ever an angle you'd like to see better developed, let us know! Your emails, reviews and comments are one of the brightest highlights of our work.