And from that day, o'er hill and glade,
through those old woods a path was made.

Here are the most recent news and ideas from Calf Trail. For the most convenient access, subscribe to our feed in your favorite newsreader!

You can even win a Geotagalog 2.x license from EMG! There's two ways:

(Do check out the video for the full details to make sure I've got it right. Also, this giveaway might be illegal in Quebec, which makes it that much more fun, mais oui?)

Oh — if you've already purchased Geotagalog, before the free upgrade period began (i.e. before October 22, 2009), we'll throw in a Photon Star license too if you win the full Geotagalog v2 license from Elliott Media Group.

Sesamouse is most exciting when it's enabling other applications to use the Magic Mouse for multitouch. One of the most frequent requests has been to get rid of the Dock icon. Starting with version 1.2, Sesamouse sends real Magic Mouse pinch zoom and rotate gestures from the background, with a menu bar icon instead.

While Sesamouse's primary feature is real multitouch gestures and NSTouch information for Cocoa apps, it can be very handy to trigger Exposé or other Mac OS X features from the mouse. So Sesamouse 1.2 also adds optional support for a few commonly-requested system hotkeys: 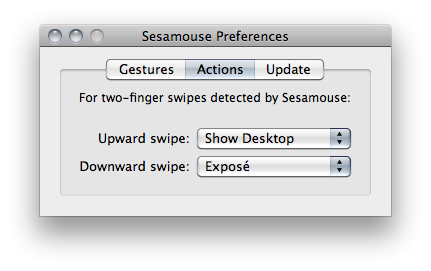 Mighty Mouse users might still miss activating these features in "hold" mode, but these gesture shortcuts are easy to set up for those who find them helpful. Rather than having fewer productive features than the previous model, the Magic Mouse can provide real multitouch and some handy shortcuts — when used with Sesamouse, that is!

Along with a minor update, we've made a video screencast demonstrating how Photon Star makes rating fun and focused:

Because of an issue with automatic updates for full screen apps, you'll need to manually trigger "Check for Updates..." in the Photon Star menu to get the 1.0.1 fixes.